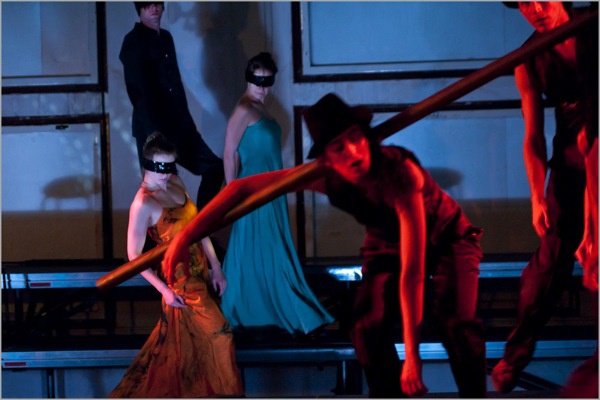 A game for actors and spectators which can overpower its own players, a game no one can escape. What happens when people lose their cultural identity and with it their sources of vitality and meaning of life? This performance, ironically entitled “The Theatre” is like a black mass which violates the boundary between those who are watching and those who are giving. Theater is a way of searching for human freedom within a social system. Freedom, however gradually becomes merely a game, a theater. For whom and why do we play?

"What Dočolomanský brings to stage is the theatre of life and death, the theatre of the world, an orchestra of acrobatic and dance performances. At certain moments it reminds one of carnival, at other one feels as if watching a piece of commedia dell´arte or a random street theatre just anywhere in the world... We are already used to Farm´s standard which is that they are a company of great performers, that the risky scenes are based on their perfect synergy. We also know that they can create suspense on stage as well as on the performer-spectator axis: moreover, they know how to intensify the suspense, how to handle it, control it. And in Theatre, they did their best. No discussion about that."
(Jana Návratová, Taneční zóna, 10. 2. 2010)

"The power of this artistic ensemble lies (among other things) in honest hard work. They don´t put up with half-heartedness: inspired by Afro-Brazilian slave dances? The company goes for an expedition to the very heart of Brazil. And the result shows such enthusiasm. When dance skills combine with original potential, inexhaustible energy and all-roundedness, the result is a joy to watch."
(Daniela Zilvarová, Hudební rozhledy, 5. 4. 2010)