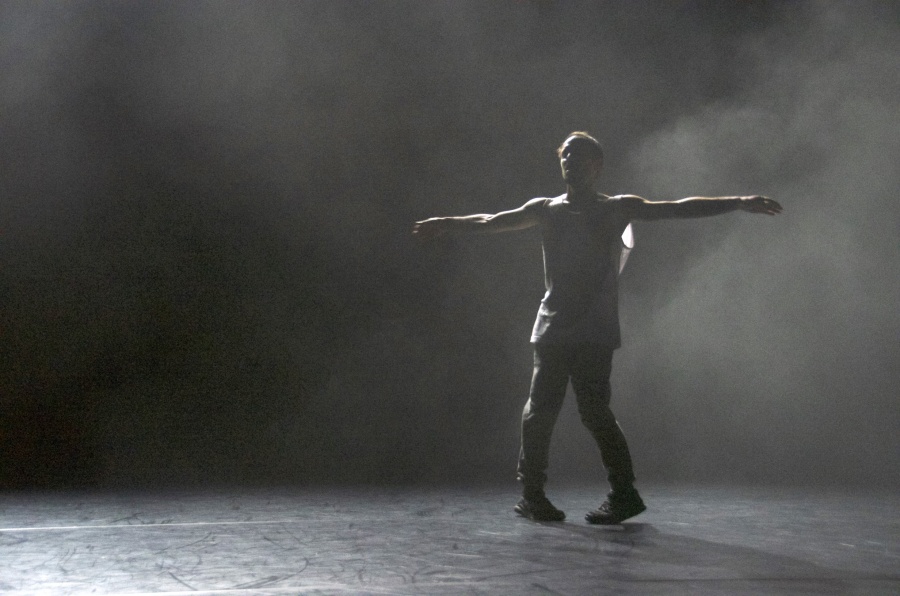 Silvia Calderoni is the central figure of this explosive and psychedelic one (wo)man show. This award-winning, eccentric Italian theatre and film actress uses her own body to present a tale of violence, pain, confusion, and (self-)acceptance. Setting out on a hallucinogenic road trip in search of freedom, she experiments with the DJ/VJ format within the context of the harrowing and decadent aesthetics of the 1970s and 1980s, which helps her to discover the space between sex and gender as well as between fiction and reality within the kaleidoscopic universe of Queer.

Silvia Calderoni draws from her personal experience, literary texts (such as the philosophical studies by Judith Butler, Donna Haraway, or Paul B. Preciado), as well as music and audio works in order to initiate a discussion about “open unity with diversity”. The concept, which deeply affects not only the artist’s life but also the lives of all of us who see the present-day complexity of Europe and the rest of the world. “The change needed is so profound that it is said to be impossible. So deep that it is said to be unimaginable. But the impossible is to come. And the unthinkable is due…” (“Feminism is Not a Humanism”, Paul B. Preciado). MDLSX is yet another example of an authentic probe into the socially sensitive zones existing beyond the boundaries of theatre and beyond the boundaries of art in the way that we have become accustomed to seeing from the MOTUS performance troupe.

The Motus Theatre company was founded by economics historian Enrico Casagrande and sociologist Daniela Nicolò in 1991. They burst onto the scene in the 1990s with performances that had a great physical and emotional impact, and always foretold and portrayed some of the harshest contradictions of the present day. Motus’ profile is characterized by a number of features: artistic interdisciplinarity, the overcoming of boundaries between the arts and the social sciences, research in the field of new technologies, nomadism, collaboration with artists from diverse cultural backgrounds, inclusion … Together with their theatrical creations, Motus has always developed an intensive program of public meetings, workshops, lectures, and seminars at universities (both in Italy and abroad) as well as at interdisciplinary festivals.

Motus has received many international awards and acknowledgements. The theatre company has received the main Italian UBU theatre prize three times. They have performed around the world, including appearances at important international festivals (Under the Radar in New York, Festival TransAmériques in Montréal, the PuSh Festival in Vancouver, Santiago a Mil in Chile, the Fiba Festival in Buenos Aires, the Adelaide Festival in Australia, and the Taipei Arts Festival in Taiwan).

Silvia Calderoni has been collaborating with Motus since 2006 and has received many awards, including the UBU Prize for Best Italian Actress and the Elizabeth Turroni Award. For her performance in MDLSX, Calderoni received an award at the Dublin Fringe Festival as well as the Best Actress Award at MESS in Sarajevo. In 2012, she captured attention with her performance in David Manuli’s experimental film The Legend of Kaspar Hauser.

In Italian with Czech and English subtitles.
Performance length: 80 min.

A very current study on overcoming oneself, it is filled with intense physical activity and focused self-exploration. This deeply personal ritual, subordinate to the powerful discipline of rhythm and gravity, raises questions about the state and situation of contemporary humankind. There is no narrative, nor any roles or motifs, just a solitary body immersed in a mixture of vertigo, torment, and arousal.

Only a body moving away from despair and resistance towards freedom and purification. The audience watches a kamikaze soloist travelling along a trajectory that has its beginning in a simple, specific physical event in space and leads to the metaphors of the current rhythm of life. The performer dances as long as his actions continue to make sense to him in the present time; as long as there is intimate sharing and a sense of belonging with the public.

A natural artistic interest brought Manuel Roque to themes of imbalance, scattered impulses, indistinct areas, and sudden collapses and catastrophes. His artistic approach combines lyrical minimalism with the physics of unexpected reversals and coarseness with virtuosity, while at the same time highlighting the deeply human aspects of existence.

As a performer, MANUEL ROQUE collaborates with leading Quebec-based choreographers (including Marie Chouinard, Sylvaine Émard, and Daniel Léveillé), and also choreographs his own pieces.
He initially attracted attention with his first solo, Raw-me (2010), at the Vue sur la Relève festival and OFFTA. In 2012, he worked with performer Lucie Vigneault to create the duo Ne meurs pas tout de suite, on nous regarde. In 2014, he presented the project In Situ. His performance Data premiered in 2015 at the Festival TransAmériques (FTA) and was subsequently seen in many other places around the world. Roque was invited to participate in the Canadian-European Migrant Bodies project, within the context of which he created his Matière Noire (2015). Other works followed: Aurora (2015)with graduates of the École de Danse Contemporaine de Montréal; 4-OR (2015) at the Tangente dance center (Montreal), and his most recent solo performance bang bang, which was introduced in 2017 at Les Subsistances (Lyon), FTA, and Festival June Events (Paris).