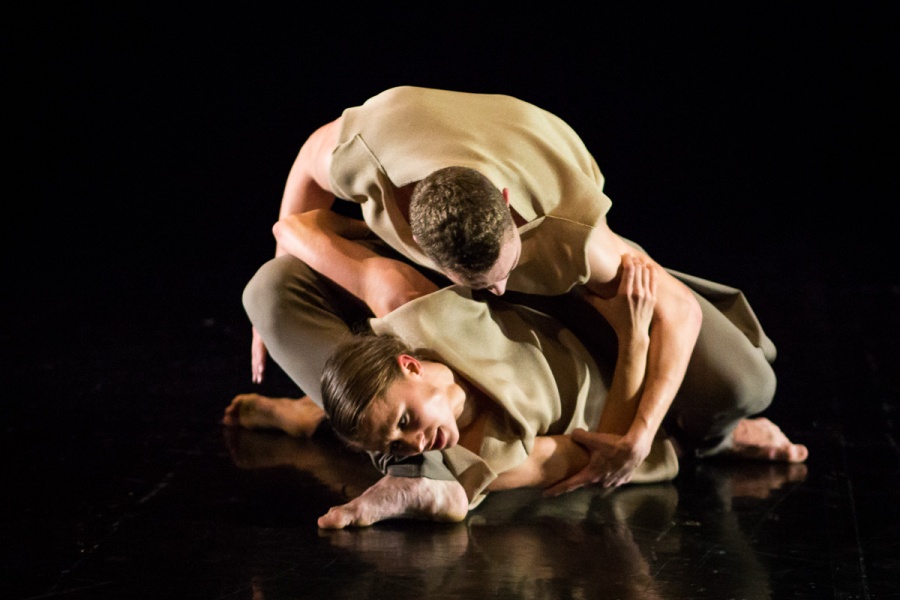 To live means to be perceived. To get to know oneself through the eyes of someone else. To find immortality in the consequences of words and actions which pervade eternity.

(based on David Mitchell)

“There is nothing in the world so unstable and distorted as the base instincts - the originators of our life. They bring dynamics and unexpectedness to our lives. They dwell somewhere inside our bodies and control it, in spite of us trying to hide this fact. The base instincts form our movement.”

The duet Metamorphic draws its inspiration freely from the artistic work of the sculptor August Rodin who shaped his sculptures fascinated by the human being, nature and dance. His way of depicting and dramatization of human body served the duet artists as a source of movement.

(„I am beautiful, O mortals, as a dream of stone!“) (Charles Boudelaire, Flowers of Evil)

A dance production of Hana Polanská Turečková exploring the motif of space-time continuum as a completely natural, self-evident factor; nothing appears to be more certain than the irreversible, unrepeatable sequence of events in nature and history referring to the theory of relativity and philosophical questions related to our past, depths of space, the origin of life and certainty of death.

Ondřej Vinklát graduated from the Dance Conservatory in Prague in 2011. In 2009, while still attending the conservatory, he joined the dance ensemble TKP Bohemia Balet where he attracted attention for brilliant solo performances in Bolero and other ballet productions such as Sinfonietta, Le Papillon (music by Jacques Offenbach, choreography Maria Taglioni), Indigo Rose (Yaron Daffan, Jiří Kylián), Suite en blanc (Édouard Lalo, Serge Lifar), Rose, Gayane and other ballet productions. He is a versatile type of dancer capable of performing in classical as well as contemporary repertoire. Together with Kateřina Plachá, he was awarded the Grand Prix Award for the Senior Duo category at the 3rd year of the international festival Ballet Days Olomouc in 2011.

In 2012, he joined the ballet ensemble of the National Theatre in Prague where he became the soloist in the season 2013/14. He performed in the roles (among others) of Basilio in Don Quijote, Krabat in Krabat - the Sorcerer's Apprentice or Romeo in Romeo and Juliet. He is also a guest dancer on other stages such as the Theatre of J. K. Tyl in Pilsen (his latest role there was Vronsky in Anna Karenina). He and his colleague Štěpán Pechar created several choreographies such as Červenej čudlik (The Red Button) or Přesně včas (Right on Time). He is a co-author (together with Marek Svobodník and Štěpán Pechar) of the choreography titled 131ND 56LM 31NS performed for the ceremonial opening of the National Theatre's 2013/2014 season. In 2013, he received the prestigious Thalia Award for his role in the ballet performance Romeo and Juliet in choreography by P. Zuska in 2013.

Martina Hajdyla Lacová graduated from J.L. Bell Conservatory in Banská Bystrica as well as from the Academy of Performing Arts in Prague, Dance Pedagogy Department. In 2008, she participated in a half-year study programme in Hoger Instituut voor Dans in Antwerp, where she worked with an outstanding Belgian choreographer, Ann van den Broek.

Petrovič (SVK), Jiří Havelka (CZE). She is a founding member of dance group ME-SA (2008), with which she participated in Edinburgh Fringe Festival, Spring forward festival/ Aerowaves 2016, among others.

Since 2009 she has been cooperating with the Slovak theatrical company Debris and the Norwegian choreographer Karen Foss, since 2011 with the Swiss company DA MOTUS! and the Czech dance company VerTeDance. She also works as a guest teacher in dance schools and studios over the Czech Republic and Slovakia.

In 2015 she was awarded Czech price „Dancer of the Year“ for her performance in SuperNaturals. For her outstanding performance in the solo project L/One of the Seven she was nominated for prestigious Czech theatre prize „Thálie Award 2016“.

Hana Polanská Turečková graduated from the Dance Conservatory in Prague, the Catholic Theology Faculty in Prague (field of study - Art History) and the Music and Dance Faculty of the Academy of Performing Arts in Prague (field of study - Choreography). She worked at the National Theatre in Brno and the National Theatre in Prague where she became a soloist. Since 2010 she has worked as an independent dancer, choreographer and educator. In her projects, she focuses on cooperation with renowned Czech and Foreign visual artists. Her choreographies were created mainly for the Prague Chamber Ballet ensemble the artistic leader of which she was in the season 2013/14. She has received many awards for her dancing and choreographic activities, her artistic works are presented on the stages home and abroad, at festivals of contemporary dance and in the context of international artistic scene. She also studies the topic of interaction between dance and other forms of art on a theoretical level.