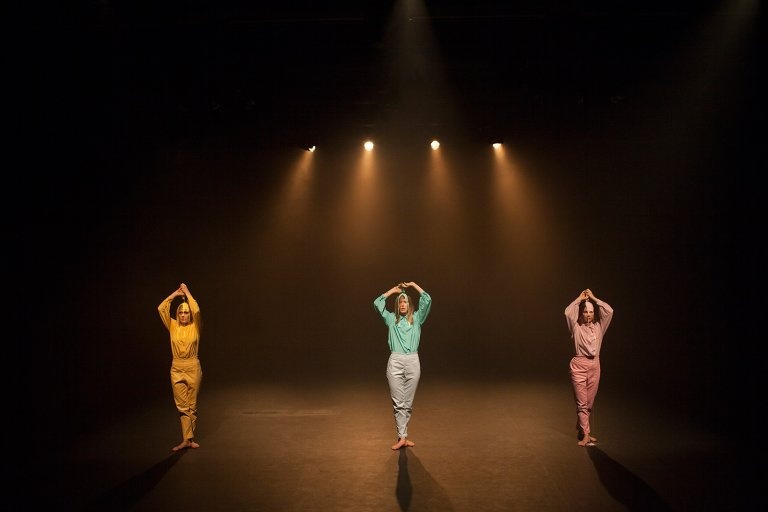 Well-known Finnish choreographer and musician Elina Pirinen first presented Personal Symphonic Moment in 2013. Pirinen herself considers the work to be a kind of “autopsy” of Shostakovich’s famous Leningrad Symphony. Pirinen’s approach to this famous composition, which is played in its entirety during her performance, is both very precise and consciously distorted, creative as well as destructive, faithful as well as entirely spontaneous. Shostakovich’s most famous symphony, composed in 1942, is usually interpreted as an expression of the struggle against fascism, but it also contains a strong personal condemnation of all forms of tyranny, including the Soviet dictatorship.

Elina Pirinen’s choreography responds to the composition’s emotional and dramatic force in a highly personal manner. Three female dancers (including the choreographer) move about a darkened, inhospitable stage, led by the music to engage in impulsive, sometimes bizarre or grotesque movements that seem to express the performers’ physical experiences and states of mind. Instead of illustrating the composition, the choreography builds its own parallel world next to it. In fact, Pirinen’s aim was to perform an “autopsy” of the famous work in order to present primitive (conscious as well as unconscious) feelings of decay, consolation, regret, beauty, senselessness, eroticism, failure, banality, anger, and sentimentality. For just a moment, high art meets a celebration of banal personal experience.

In 2014, Personal Symphonic Moment earned Elina Pirinen the Critics’ Spurs award (presented every year by the Finnish Association of Critics) for its “forceful and original choreography.”

Elina Pirinen is a choreographer, dancer, singer, composer, musician, artistic director, and teacher currently living in Helsinki. Her main areas of study were dance and choreography, followed by vocals, classical and popular music, piano, and violin. She collaborates with the Zodiak Center for New Dance, the Kiasma Theatre, and the Performance Art Center in Helsinki, and besides working in dance and choreography she is also engaged in experimental chamber pop music. Pirinen’s stage work is often based on famous classical music compositions, which she uses as a springboard for her original experimental performances.