One Step Before the Fall 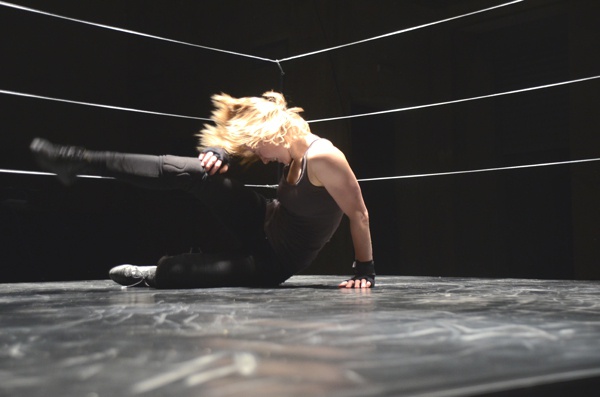 “Float like a butterfly, sting like a bee. The hands can't hit what the eyes can't see.” Muhammad Ali

A hypnotic wave of voice and sound by Lenka Dusilová and power dance by Markéta Vacovská converge in a single moment in the boxing ring. This new multi-genre project that deals with the themes of fighting, exhaustion, the symptoms of Parkinson's disease and collapse. Dedicated to Muhammad Ali and all the fighters around us.

“It's not some pretty instant dance supplemented with elements of boxing, but a powerful dance (not to be confused with forced), a confident and clearly guided performance, in which the work of each muscle can be seen and in which each movement is performed as though it alone were the main carrier of expression.”
(Jakub Novák, Aktualne.cz, 5. 12. 2012)

"A merging of these two figures with the half-improvised sound generated by a synthesizer and Lenka Dusilová's vocals and with Markéta Vacovská's extremely physically challenging performance loaded with imaginative movement and abstract physicality that unearths the existential depths of the human body and psyche."
(Vladimír Hulec, Divadelní noviny)

"The dance of Markéta Vacovská has its explosive moments, just like Ali's own personality and rhetoric could explode, but it constantly teeters on the verge of falling, much like Ali himself could fall when dealt a K.O."
(Tomáš Kůs, CityOutPrague)

"There is nothing on the stage except for two women and boundless energy. Just the dance, singing, music and sound; no words, yet saying everything that needs to be said."
(Dominik Melichar, Divadelní noviny)