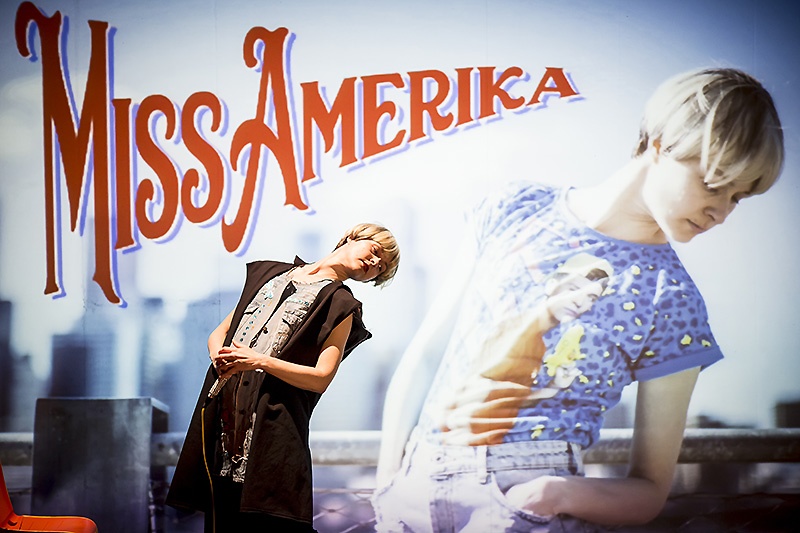 Dramaturgy of the show: Petr Boháč

Thanks to Jana Hunterová for photos from New York subway.

Supported by: City of Praha, Ministry of Culture of Czech republic.

The story of a woman who’s fallen in love with a city to which she is a stranger.

Mckenzie Tomski is a New York misfit, an unobtrusive, yet self-confessed starer. Mckenzie is a queen of virtual loneliness in the same way as Wonder Woman without high boots and legal status. She is a creature of liquid identity, disrupting American clichés with ironical, dark and uncompromising humor. Mckenzie comes from a line of outcasts, stray people, those who are standing in shadows, in the gray zone, and dreaming their American dream, that one day they will “prove themselves”.

The multimedia project of Miřenka Čechová and Martin Tvrdý presents a crude image of life on Manhattan via a collage of music, text, rap, slam, stand-up, performance, photographs by Vojtěch Brtnický and the comics by Malayan cartoonist Chin Yew. The symbiosis of all those components creates an authentic story of a woman who’s fallen in love with a city to which she is a stranger.

The project is based on a book by Miřenka Čechová Miss AmeriKa, published in July 2018 in the publishing house wo-men.

Performance is in english without subtitles.