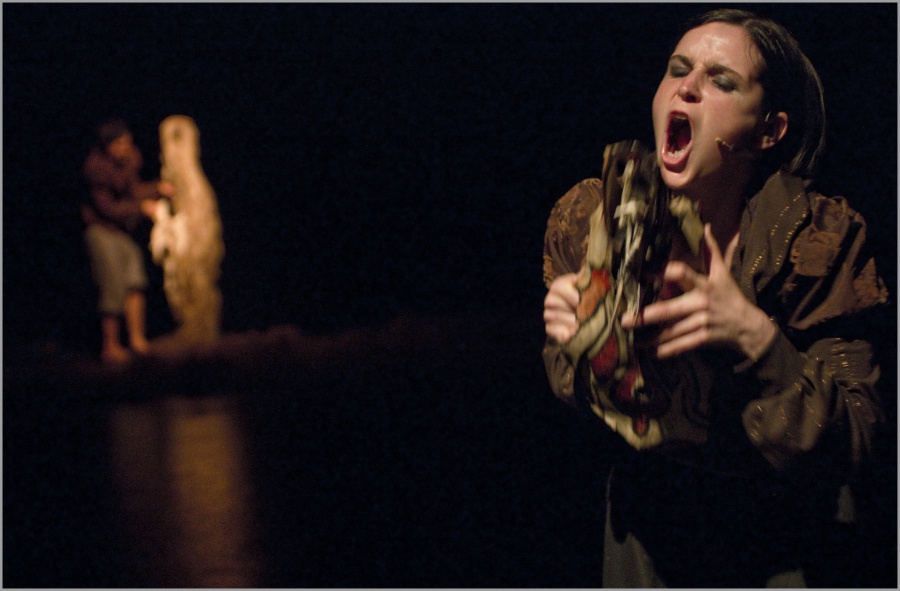 Curious at first sight, quite extraordinary. Though, she is hardly noticeable. No one can hear her,
though she is not mute. Even though she stands, she turns.

La Loba is the performance of Lenka Vagnerová & Company which combines two art genres
and two remarkable artists: dancer Andrea Opavská and singer Jana Vébrová. It is based on
their unbridled energy, harmony and above all, power and intensity of expression. The key
component of the performance is the music of Ivan Acher which springs from the sound of
natural matters. Bones, wood, strings and animal skins are the elemental essences for building
ritual moods bonded with the voice Jana Vébrová.

La Loba is inspired by the story which is carried on by generations of storytellers in many
different locations: A woman wandering through the countryside for years and building
creatures out of the bones she carries around, has the ability to turn creatures back to life. She
encompasses both life and death. However, none of us could know how difficult and unbearable
her destiny is for her. And what if her powers last forever? She's watching us all the time. We
are just a short period of her life. Sometimes she laughs at us. But what if her patience runs out?
She masters the conditions of her own existence and maybe she will not want to repeat
everything once again.

„Opavska is like a magnet - drawing us in from the first second to the last"
(★★★★★ Kelly Aptel, THE SCOTSMAN)

„A mysterious, vivid and sometimes stunning blend of movement and voice"
(★★★★ Donald Hutera, THE TIMES)

„Gripped by the sheer intensity and virtuosity of both performers"
(★★★★★ Mary Brennan, THE HERALD)

„Memorable for all the best reasons"
(★★★★★ Mary Brennan, THE HERALD)

„Beautiful exploration of mythology to conjure up the inner wild woman at the Edinburgh Festival
Fringe"
(★★★★ Lucy Ribchester, THE LIST, 15.8.2014)

„Those images, combined with Opavská and the sound scope of Vébrová´s voice make La Loba
impossible to forget"
(★★★★ Lucy Ribchester, THE LIST, 15.8.2014)

„Vébrová´s singing is incredibly powerful, and one is mesmerised by Opavská´s dancing."
„La Loba is a visually fascinating show that bridges the gap between dance lovers and general
public."
(★★★ Alex Reevers, BROADWAY BABY, 21.8.2014)

“Lenka Vagnerová’s latest artistic creation is simply breathtaking. The mysterious multi-layered production stands somewhere between the world of reality and fantasy. It is literally packed full of tension which draws in and in places jolts the viewers."
(Johana Mücková, ČT24 kultura, 2013)

“The close, organic contact between music and dance exerts an almost magical spell over the stage. The bewitching voice of singer Jana Vébrová, in places almost indistinguishable from the growling of wolves, reverberates with such gusto that it is practically impossible to look away.”
(Linda Dušková, Radio Wave, 2013)

“Every side of this triangle is a captivating chapter in itself and in their synergy they channel this legend’s strength to the public in all its beauty. The rising star of Czech dance Lenka Vagnerová has unveiled her new project in all its remarkable originality.”
(Jakub Novák, Aktuálně.cz, 2013)

“There can be no doubt that behind choreographer Lenka Vagnerová’s recent successes, whether these be the choreography for The Riders or her latest production La Loba, there is a very great talent: the young artist displays an enormous amount of clasped energy, of great imagination, hard work and courage. The strange atmospheres and off-kilter situations can be alarming and can be amusing. La Loba sometimes seems like a Meduza scream, like a howling she-wolf, like a moan when giving birth.“
(Jana Návratová, Taneční zóna, 2013)

"From an enclosed being concealing energy at its core comes an eruption of movement, giving the impression that its centre of gravity has flowed out across the ground following the commands of choreography and regardless of the laws of physics."
(Lucie Kocourková, Opera plus, 2013)

“Devoted at moments, mad at other, sometimes comical, sometimes scary, even heartbreaking it is... La Loba is a successful, thrilling piece that will not let you get bored or permit your mind wander.“
(Daniela Zilvarová, Taneční aktuality.cz, 2013)