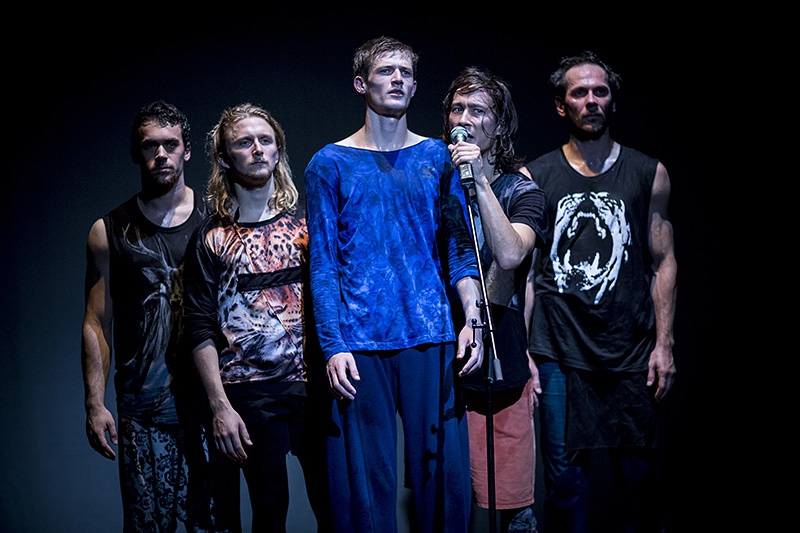 Under the auspices of the Embassy of Israel.

The Jew Tom, adaptable Nathan, helpful Jacob, genuine and pure Knut, and boss Joona – at least 50% better than everyone else. Together with this merry band of five guys we focus on a powerful social phenomenon, one of humanity's strangest pleasures: the pleasure of killing and participating in violence. The joy of killing gives one a unique feeling of absolute power and freedom. But for the victims it is hell itself. And random witnesses? They do nothing. Suffering from collective loss of memory they just watch.

"Collective Loss of Memory by choreographers Jozef Fruček and Linda Kapetanea qualitatively surpasses the majority of current domestic productions – it is more intense, clever and at the same time accessible."
(Jakub Novák, Aktuálně.cz, 22. 10. 2014)

“... the dance sequence in the middle captures a group of men in ecstatic dance made of jerky movements and widespread gestures and interactions. The line between embracing and assaults is extremely fine, the faces showing joyful and excitement. There are moments when they are a homogenous collective, whether seated on the ground or tightly pressed to one another, rushing across the stage. It is those scenes that make one think of a group of hunters or fighters, men getting back to their roots...”
(Lucie Kocourková, Opera Plus, 19. 10. 2014)