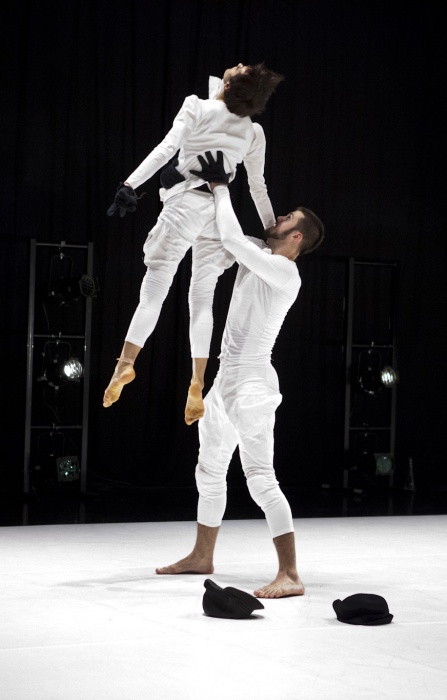 “I live in a world without animals. I do not know their rules. In this duet, two people decided to live a hunt. What it will be like will depend on the rules which will be established."

This performance that earned critical acclaim is a relentless play of two people. Wild, constant fight mingles with mutual respect and harmony. The hunter may easily become the prey.

The performance is full of dynamic dance, musical and acting situations; it does not lack humour and hyperboles. Two persons living in a fictitious time when there are no animals will guide us through their fantastic world in which these animals are revived. Thanks to the precise lighting design the scene plastically changes into different environments. Short stories full of symbols also reflect an absurd relationship between two people who are trying to retrieve lost emotions and the meaning of their life. They remind us of how important a symbiosis between men and animals is and how empty would our lives be without not having animals around.

"The Czech choreographer Lenka Vagnerová presented her performance Mah Hunt to the schoolchildren from Bonsjöskolan Fyren in Härnösandu yesterday. This fascinating and powerful piece won the highest possible recognition of the young audience. I have never seen an audience of 9-10 year old children that would be fascinated from the first till the last second and sit silently for more than an hour.”
(Lars Landström, Allehanda)

"This playful, sometimes chilling, play is charming and elegant. It is so entertaining that even children enjoy it and so chaste that their parents do not take offence."
(Vojtěch Varyš, Týden.cz, 23. 10. 2010)

"Good dynamics, clever ideas and humour are the distinctive features of the performance. All this, however, would not work without a full concern of the dancers themselves... Mah Hunt has all that could be expected of a good dance performance. Excellent dancers, technical precision, full engagement, swiftness and an interesting idea that will not let you leave the theatre unaffected."
(Anna Konigsmarková, Metropolis, 30. 9. 2010)

"The performance splits in short scenes in which the interpreters offer a tender shadow play, wild music, calming and mysterious sounds of a jungle or a perfectly harmonized movement delicately underlined by the precise lighting design. All this together installs a lyrical atmosphere dramatized by the repeating fights in which one is the hunter and the other one is the hunted, whilst these roles steadily take turns."
(Veronika Štefanová, Divadelní noviny Blog, 8. 9. 2010)