L / One of the Seven 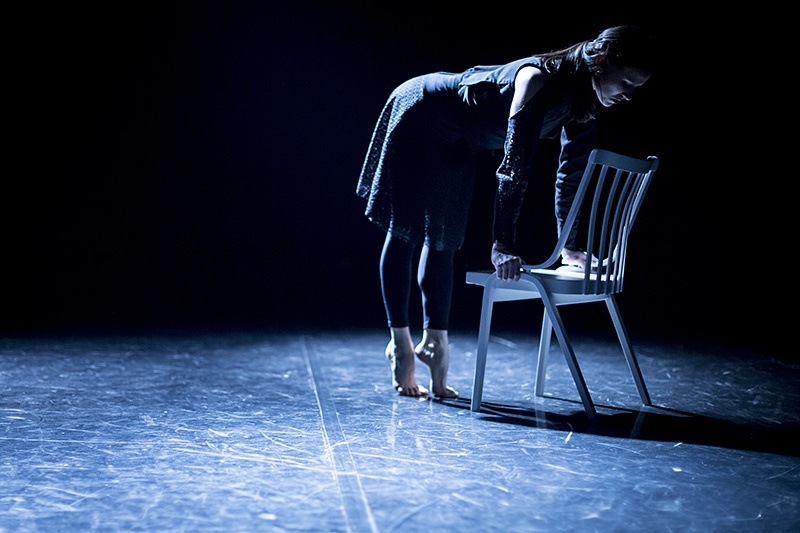 The unceasing infernal tempest,
Tears down the souls, pulls them about, tosses them,
Rubs one against the other, those sinners.
(Dante Alighieri, The Divine Comedy)

L stands for „Lust“ – desire, passion, pleasure, fornication. It refers to something over the line, to something extreme. Choreographer Andrej Petrovič places only one person on the stage – a woman, whose thirst can never be satisfied. A queen, who sinks into the depths of her own inability to rest, calm down, stop and resist her wishes and desires at the same time. The self-destruction becomes her choice.

L / One of the Seven is the first of seven solos, in which the author is going to render the topic of the seven deadly sins. At the same time, this project is a comeback of choreographer Andrej Petrovič to Central Europe, after he had worked for almost ten years abroad, above all as a dancer and choreography assistant at the Akram Khan Company. The central character of this project is Martina Hajdyla Lacová, the founder of the ME-SA ensemble and the Dance of the Year 2015 Award holder.

Martina Hajdyla Lacová graduated from the J. L. Bella Conservatory in Banská Bystrica, Slovakia, and from the Academy of Performing Arts in Prague. During her studies, she cooperated with many Czech and Slovak choreographers (Marta Poláková, Mirka Eliášová, Šárka Ondrišová, Debris Company), as well as with foreign ones (Ji-Eun Lee, Karen Foss, Ann van den Broek, Maya M.Carroll). Since 2010, she has worked as a freelance dancer and pedagogue. She combines her work in Prague and abroad. In Prague, she is mainly occupied by her base ensemble – ME-SA, which she co-founded five years ago with dancer and producer Karolína Hejnová, and also by VerTeDance and NANOHACH. In Switzerland, she works with DA MOTUS!, and in Norway with choreographer Karen Foss. Her solo, which she both created and performed, was nominated for the Dance Piece of the Year 2012 Award. In 2015, she was awarded the Dance of the Year Prize for her performance in the show SuperNaturals.

Martina Hajdyla Lacová from the ME-SA ensemble is pure perfection. Andrej Petrovič has approached the topic very unusually – through the body of the dancer and her sovereign dance culture. On top of that, he completely scatters the a priori expectations of the audience; he doesn´t expose her body as sexual, but as a dancing one. And he asks, what are the consequences of Lust empowering the body – when the body is driven by the sensuality to disquiet, when the sensuality changes its usual order and gets rid of the logic of motions enlightened by the daily brightness of mind, when it makes it absurd, ties it down, consumes and burns it. The choreography doesn´t include any lasciviousness, any clichés or decadent women, or anything cheap, not even anything explicitly erotic. On the contrary, this dance piece about Lust is as noble as possible. Quando una donna nobile…

The young woman that we see lying on the ground at the beginning, is decent, she has a graceful slim look and brown straight hair, she is elegantly dressed in a brown costume cleverly tailored from luxury materials. While lying on her back, she plays with a white chair. The fingers of her sensitive hand look as if they were looking for the G-spot at the armrest. Or maybe they are just pure possibilities of hand motion. Her lust is not displayed superficially; at first, we see rather elastic, discreet and a little sneaky stretching of her slender muscles and tendons in unusual positions – she is bending forward and she runs on all fours; lust bends her physical shapes just like a breakdown bends a hysterical woman. At the same time, these positions are treacherously moderate and unpredictable.

Anything the dancer does, is absolutely perfect – her silhouette is perfect, the shape of her ankles and her calves, her spine string – a string indeed – is elastic, pliable and quivering at a high frequency. This is the body that can express the most delicate physical trembles and the dancer has every tendon, bone and skin area under absolute control. She has displayed an uncontrollable, impulsive and sinful body in a broad range of unexpected possibilities.

The whole evening was dominated by the performance of Martina Hajdyla Lacová. Her excellent interpretation of particular states of mind and the way she embodied the madness that originated somewhere deep in her soul and body, is fascinating. Particularly the scene of insanity disrupted me and left a great experience, including the goose bumps all over my body.

The awakening of the wildness is slow. Above all, the audience can watch the pure shapes of the body that gradually becomes pliable and the energy flows through it more and more vigorously. Probably the best phrase to express the general impression is “cultivated passion”.

The dancer´s slender body is gradually put in motion and it searches through the space as if it was hunting. It becomes pliable, but at the same time it remains on alert, as if it was driven by the primal instincts. She never relaxes completely. The choreography also doesn´t lack wit; spectators will probably long remember the etude with the black panties, but more as a memory of the almost equilibristic performance of putting on the underwear without using hands. (…)

Martina Hajdyla Lacová enraptures with her look and her inner tension, which the spectators share with her as they watch her motion and her numb awaiting of the next action. (…)

The purity of the solo is calming. Even though it is about passion and lust, you will not find any traces of provocation or vulgarity. Nevertheless, the physical allusions of sexual satisfaction are apparent. But this is not a crude physical theatre. It is a seducing play and the spectator can become its victim. In this play, you will not feel any danger. This choreography is ideal for spectators, who want to experience the pleasure of the beauty of motions.