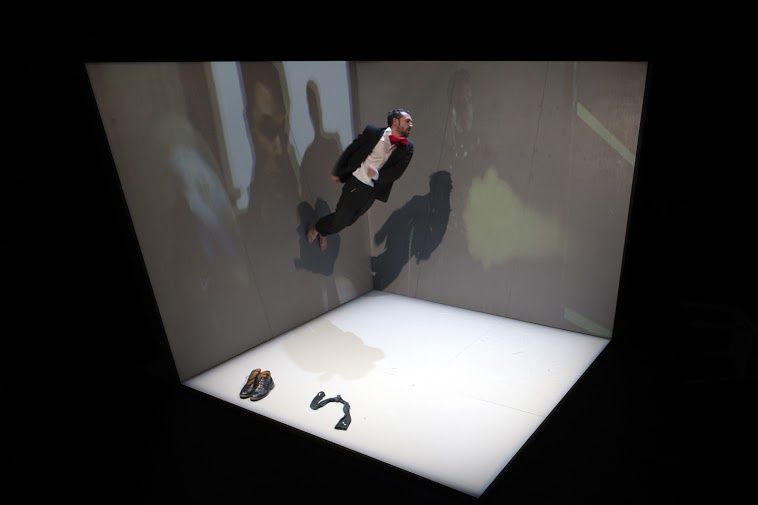 The newest solo by Belgian choreographer Karine Ponties – who is well known to Czech audiences – is an adventurous, absurdly fantastical mission in which the hero, portrayed by the highly original Eric Domeneghetty, seeks reconciliation between humanity's ceaseless desire for supernatural abilities – strength, speed, flight – and belief in reconciliation with its own clumsiness. Heroes never give up and always win. There is nothing one can do but stand up again and again in this mad race taking place beyond the borders of human nature. Hero% is further confirmation of Ponties' sophisticated stage poetics, in which the movement, visual and music concept create a compact, intricately layered and suggestive shape.

Dame de Pic, the company of Karine Ponties, celebrates this year  its 20th anniversary. Over that time Karine enjoyed working with artists from the Czech Republic, and this year she decided to ask some of them to participate in the second part of an evening entitled Cartes Blanches, where they could present short works specially created for this unique event. The evening will feature: Pavla Beranová, Florent Golfier, Marie Gourdain, Lukáš Karásek, Tomáš Morávek, Pierre Nadaud, Zuzana Režná, Jaro Viňarský

„True to an aesthetic she has developed over several years—hybrid, questioning dance, never narrative though gushing with bubbles of narrative—Karine Ponties manages to affirm and infuse her choreography with a tenderness bordering on irony for humankind, its blunders and hidden secrets.“
(Marie Baudet: The frenetic race of HERO%, La libre.be)