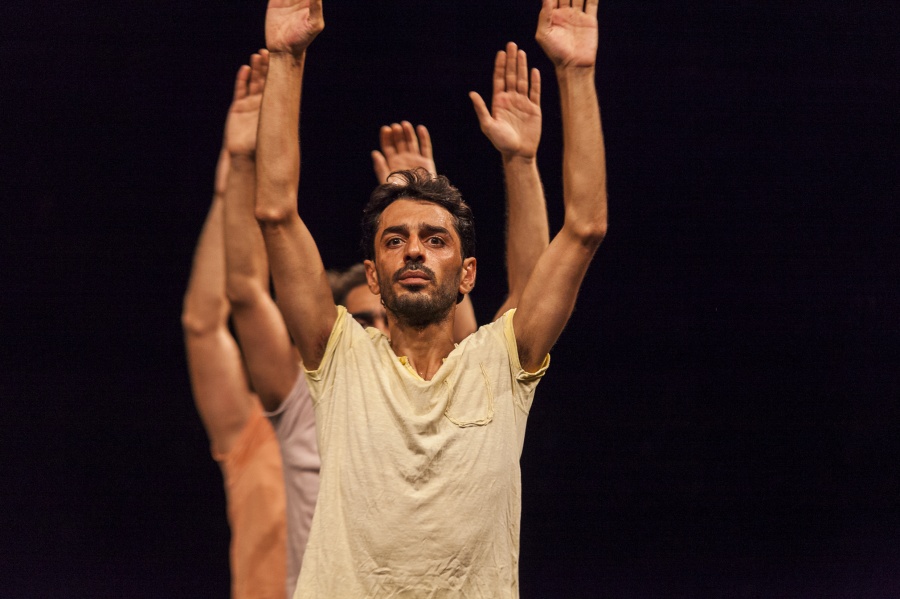 The choreography of Syrian dancer and choreographer Mithkal Alzghair is set against a background of two
conflicting emotions. On the one hand, the hope of salvation in the form of escape and, on the other, the
depressing idea of ​​the impossibility of return. This work, comprising two parts – Alzghair’s solo followed
by the performance of three male dancers – grew out of an analysis of two dynamics, specifically forced
movement and restricted movement. At the same time, the choreographer asked himself several general questions: What does an involuntary movement look like? What happens to a body that is forced to remain stationary? The whole concept of the work is deeply rooted not only in Syrian cultural heritage and its traditions, but also in the artist’s authentic personal experience, in his story: “The wait before the departure, exile – these
are things I experienced physically. I had to leave behind a territory that had been created by an entire community of which I was a member, which also meant leaving behind habits, relationships, and commitments. The change in the political and social context in my country led to accidents, extraordinary incidents, and catastrophes that forced me to move physically, emotionally, and intellectually.”

The choreographer used the footwork from the dabke folkdance, which is typical throughout the entire middle
east, embellishing it with the use of real and symbolic gestures. In this way, he evokes all of the various
aspects associated with the situation of migrants, and, at the same time, through the way he has transformed this traditional dance, highlights the themes of adaptation, building a new context, and regeneration. Displacement is based on a specific heritage, going beyond the boundaries of cultural differences, in order to explore the conditions of life in exile.