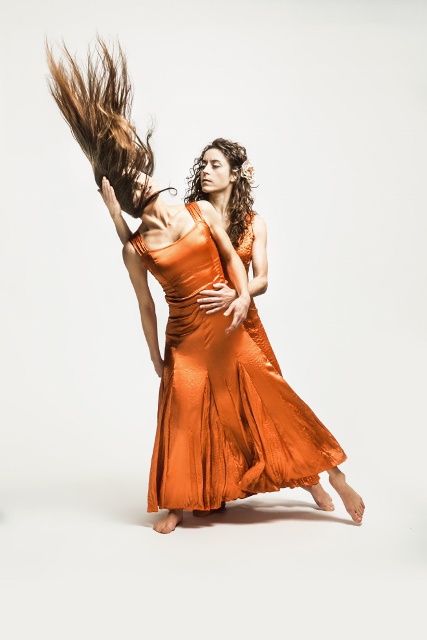 Jana Drdácká, a Flamenco dancer, choreographer and teacher, is a Flamenco pioneer in the Czech Republic. She acquired her expertise and experience during numerous study visits to Spain and the United States. Since 2001, she has been running her own dance school in Prague. She has co-founded two musical dance ensembles, Arsa y Toma in 200 and Flamenco Element in 2010. At the same time, she produces her own projects and performs with prominent Spanish artists.

Anežka Hessová, is a dancer and a teacher of Indian dance. In 2008 she studied at the prestigious Kathak Dhwani Dance Academy in New Delhi (having been awarded a year-long scholarship from the Indian Council for Cultural Relations). In addition, she has been on study visits in Bangalore and Benares in 2001, and in Kolkata (formerly Calcutta) in 2006. She performs in the Czech Republic and abroad. She also dedicates herself to theater and film.

This dance project, created by Jana Drdácká (Flamenco) and Anežka Hessová (Kathak), delves into two music and dance traditions, one from southern Spain and the other from Northern India, presenting them to audiences through personal stories and the particular outlook of each interpreter.

Flamenco and kathak have common roots in the depths of history and a common intermediary – Gypsy (Roma) musicians and dances who brought elements of Indian dance to Andalusia on their long journey through Asia and Europe.  Little is known about the real history of that connection. It is largely supposed that flamenco has its roots in the exodus of “Untouchables” from the Punjab around 800–900 AD. These people became the Gypsies/Romanies of lore, traversing Asia and the Middle East, eventually settling in Europe. Today Rajasthani Gypsies can be seen using ancient castanets to embellish their songs about nomadic existence and spiritual devotion. It is through these songs that the origin of flamenco can be clearly identified. A defining element of flamenco music is undeniably the singing, cante. In fact, flamenco initially consisted purely of cante, with handclapping – palmas sordas – or knuckle rapping providing percussive accompaniment. The guitar, a variation of the Arabic ’ūd, was gradually incorporated in the 19th century.

Jana’s and Anežka’s performance does not aim to unveil the precise historical circumstances of the relationship between Flamenco and Kathak. On the contrary, it plays with both traditions in a unique way to bring out the intimate testimony of two women who have spent their lives learning about these cultures and introducing them to Czech audiences. In the reflections of these ancient, mythological, cultures they explore their own depths and desires, their own selves...

The word Kathak means “storyteller” – that is, one who tells stories of the gods and goddesses. Kathak’s origins lie in ancient Hindi India. Originally a temple dance, it moved into the royal palaces of the Mogul rulers in the 15th century. At present, it is performed in theaters and is one of the most widespread of classical Indian dances. Although one of the earliest of dance techniques, it dazzles audiences to this day with its impetuous energy, dynamics and unexpected rhythmic forms.